If there’s one thing I’ve learned from my elders, it’s that you never need much of an excuse to enjoy a glass of prosecco.

Meet Giuseppe and Liliana Minato, my grandparents on my mother’s side:

In true Minato style, the dapper couple is making short work of a bunch of bubbly. This shot was taken sometime in the late 1960s, but it shows a familiar scene: bottles strewn across the table, with sweets and savory pastries laid out for the taking – or as it’s called in Italy, a brindisi.

A brindisi is a celebratory toast, a way of honoring family and friendship over a drink. It can be as formal or spontaneous as you like; anywhere from a baptism reception to an unexpected visit from a neighbor is an appropriate occasion to toast to health and happiness, especially during the holiday season. Swinging by your great-aunt’s apartment to say hello on the way back from an errand? She’ll promptly whip out a plate of cookies and a bottle of prosecco. A friend pops by to pick up their kid who you’ve babysat for the day? Now’s a good a time as any to open up that bottle of wine you’ve been saving in the cantina. Dropping off a Christmas present at your second cousin’s house? Time for a cocktail!

That being said, Italy, on the whole, is not a nation of raging alcoholics. Yes, it’s totally acceptable to toast anytime beginning at about noon, and theoretically you could transition from your morning cappuccino (acceptable until strictly 11am) directly to booze, but most tend to stick to prosecco earlier in the day, because it’s a lighter, less alcoholic option.

Prosecco, a white sparkling wine, has been getting a lot of press these days since its popularity in the U.S. is rising, while champagne is slightly lagging by comparison. The main differences between prosecco and champagne are the type of grape used (Glera for prosecco, versus Chardonnay, Pinot noir, and/or Pinot Meunier for champagne, with a few exceptions), the geographical area in which the varietal is grown, and the method of fermentation (champagne is fermented for a second time in bottles, while prosecco is usually poured in large vats after the first stage).

Though now it’s also made in other areas of Italy, like Friuli-Venezia Giulia, prosecco production has been long-rooted in the Veneto region, which claims Venice as its capital city. Because of its access to top quality sparkling wine, Venice is the birthplace of many fizzy cocktails, like the famed bellini, which mixes prosecco with fresh peach juice. (My grandfather Giuseppe’s family was Venetian, so I suppose my love of fizz is partially genetic.)

This year, I’ve started to substitute pomegranate juice for the peach nectar to make a holiday twist on the classic. I aim for about 3 parts prosecco to 1 part pomegranate, though if you prefer your drink a bit sweeter you can increase the amount of juice. Seeking out pomegranate juice that isn’t from concentrate will make a big difference in the flavor. Here is my dear friend Gen, making the drink look pretty: 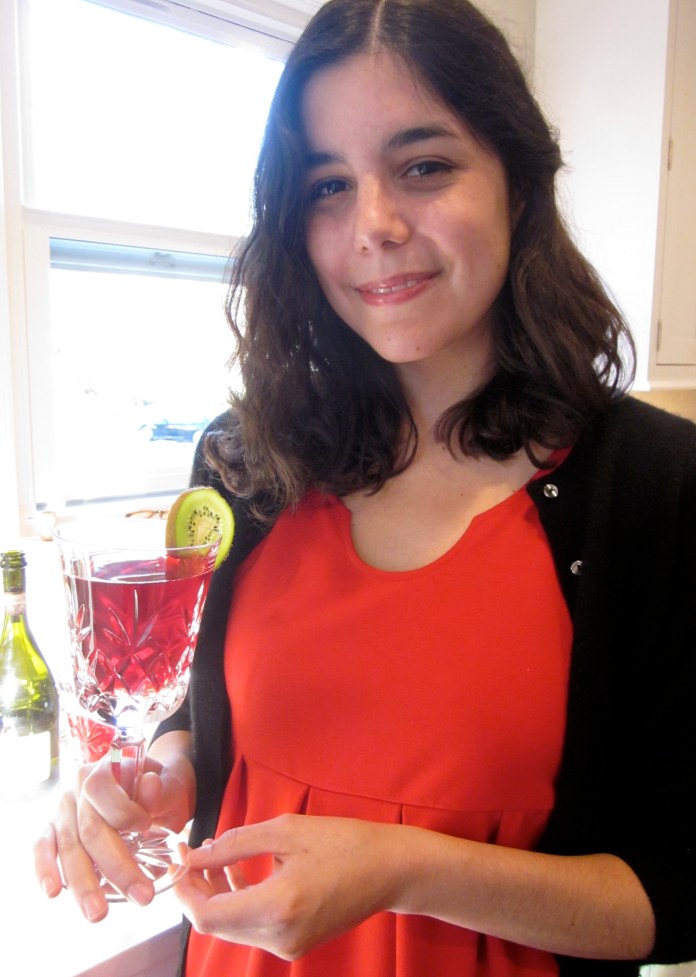 So, friends of the blogosphere, here’s a virtual brindisi to wish you a Happy New Year! You may already know Salute! (“Health!”), but this year why not try toasting with another way of saying “Cheers” in Italian: Cin cin! (pronounced “chin-chin”). An Italian friend once explained to me that saying Cin cin is meant to complete the sensory experience of your drink. You see the drink’s color, smell its aroma, touch it to your lips, and taste its flavor – but how can you hear it? That’s why you clink glasses, exaggerating the sound with the onomatopoeic Cin cin. Music to my ears. 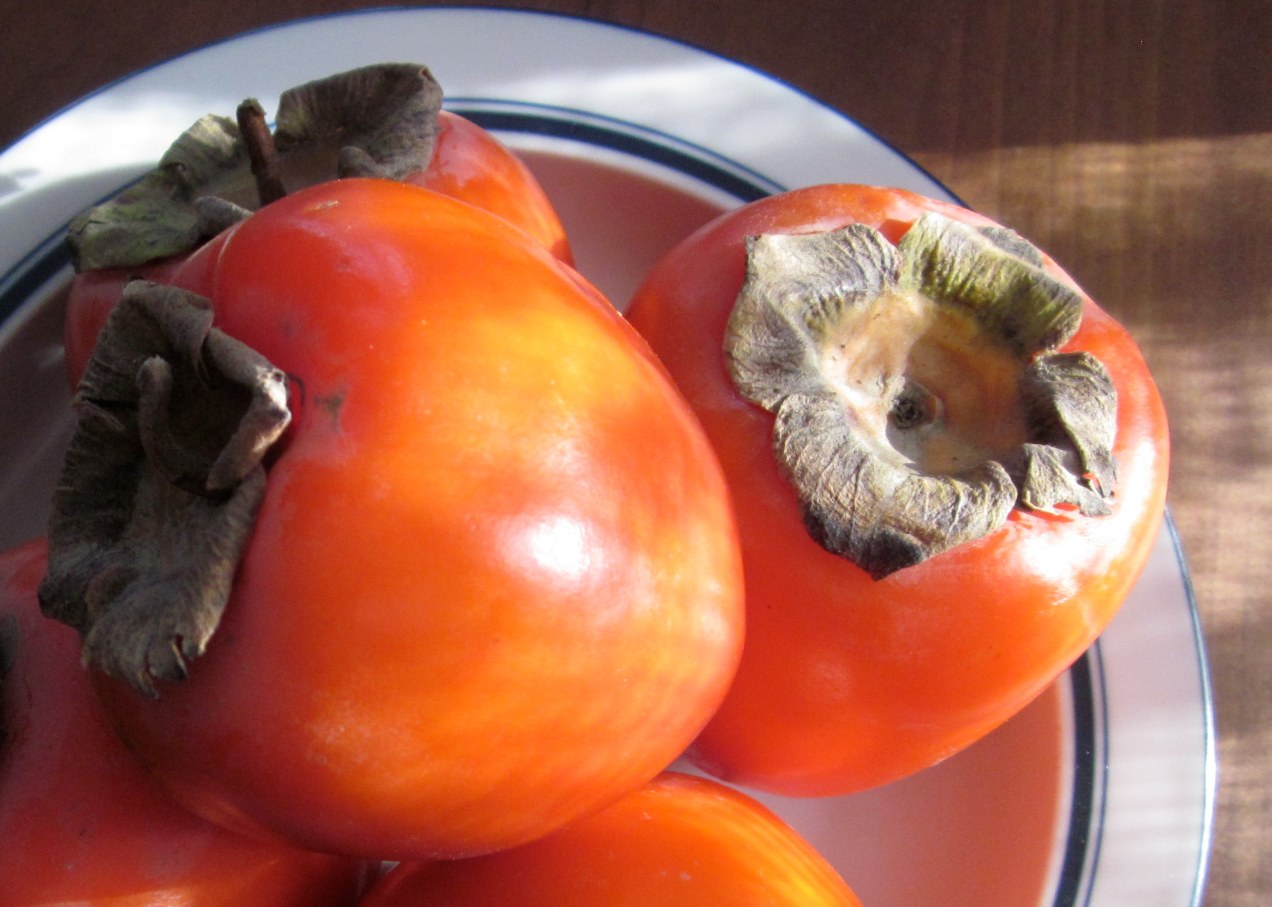 Not much has changed since I was a youngster – you can still find me in the kitchen, though I’ve graduated from my Tupperware mixing bowl:

One thing that has changed, however, is my love for persimmons.

Whenever my parents and I travel to Northern Italy for Christmas, persimmons are nearing the end of their season, still persistently lending their festive red-orange color to otherwise bare yards. Throughout the season, from October to December, they’re so plentiful and are literally falling off trees, dragging down branches with their plump promises of sweetness. By the time we roll into town, friends and family have already reached the limit of how many persimmons they can possibly stomach. Knowing my dad’s unfailing love for the fruit, the neighbors promptly start their procession with overflowing baskets over to my aunt and uncle’s house, relieved to be handing over the torch.

Maybe I was too distracted by the panettoni and pandoro, or maybe there just weren’t any left after my dad got to them, but for some reason I never appreciated persimmons until recently. They’re part of the shrub and tree genus Diospyros, a Greek word that translates to “divine food” or “fruit of the gods.” And rightly so –  they taste like an otherworldly mix of apricots and honey. 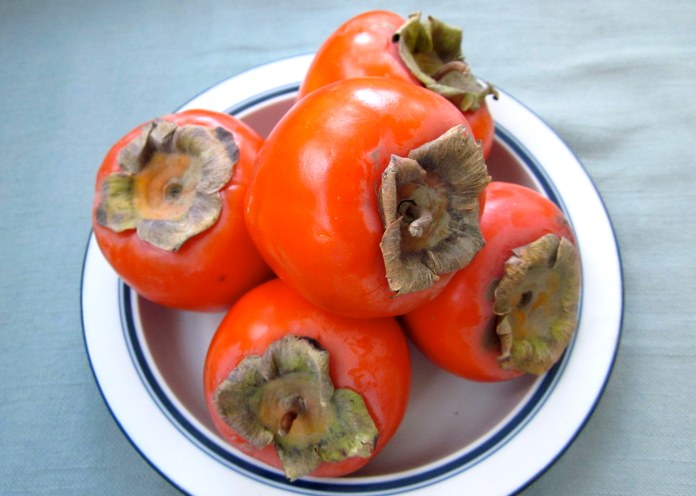 Though their high price may dissuade you from buying them on a whim, persimmons are becoming more widely available in grocery stores here in the U.S. The two main varieties you might find for sale are Hachiya (above) and Fuyu. Small and squat, similar in shape to a tomato, Fuyus can be eaten just like an apple, skins included. Hachiya persimmons, on the other hand, are only edible when they become very soft, almost mushy, otherwise they’re too bitter. It’s not recommended to eat their skins, though my dad is undeterred by them – then again, he’s also known for eating the entire apple core, seeds included. I find they taste sort of cottony and opt to do without, scooping out the inside with a spoon.

Persimmons are so richly sweet that they are plenty decadent on their own, without any extra flourishes. Even so, I came across a dessert idea in this month’s Bon Appetit that piqued my interest, and it has become a new favorite: 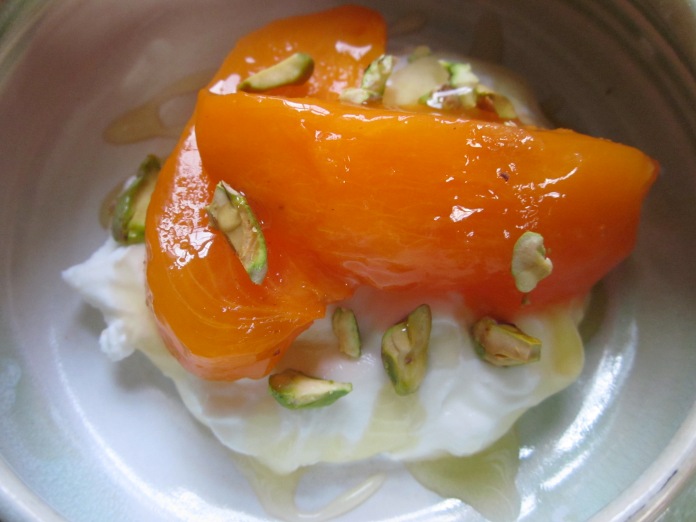 Simply spoon some Greek yogurt in a bowl, top with persimmon slices and crumbled pistachios, and drizzle with honey.

The tart yogurt cuts the sweetness of the persimmon and honey beautifully, and the pistachios chime in with an unexpected crunch. The combination is a nice antidote to all the heavy holiday fare this month. Forget the berries with ice cream you may be missing from summer – this will make you glad to hunker down and welcome winter.

As a follow-up to my list of proverbs, here are a few common descriptive phrases in Italian making use of food as a metaphor. These modes of expression are tucked into all kinds of conversations, showing how knowledge and respect for food are deeply ingrained in the daily life of Italians. And above all, they speak to an imaginative spirit, one that finds meaning and humor in the everyday act of eating. Lots more where these came from:

Essere alla frutta   |   To be at the fruit
Fruit is the last course in an Italian meal, so the phrase refers to being at the last stage of a phase, or reaching the end of the rope. At the height of Berlusconi’s power, you could hear many an Italian lamenting “siamo alla frutta” – we’ve reached our limit.

Essere una pentola di fagioli   |   To be a pot of beans
To talk incessantly, like a boiling pot of beans.

Essere come il cavolo a merenda   |   To be like cabbage at snack time
To be irrelevant or out of context. Merenda, or snack time, is a beloved time around 4pm in Italy when you have a snack to tie you over until dinner. A typical snack would be a pizzetta (mini-pizza, more like a pastry) or gelato – nothing involving cabbage.

Fare il pesce in barile   |   To be the fish in the barrel
To be indifferent and avoid taking sides, acting like you can’t hear or see what’s going on around you. In earlier times, fresh fish was stored in barrels, filled to capacity and preserved with salt. The implication is that a fish in such a barrel would be so crowded that it wouldn’t be able to see anything.

Essere buono come il pane   |   To be as good as bread
It’s well known that bread has very positive, life-affirming connotations – in English, we call it the “staff of life.” To be as good as bread, in Italian, means someone is genuinely kind and altruistic, as pure and golden as fresh bread.

Avere poco sale in zucca   |   To have little salt in squash
Squash, or zucca, in Italian is also slang for head. Gourds are low in salt and, instead, full of water – a watermelon is a perfect example. To have more going on than just a bunch of water in your head suggests that there’s some grey matter there; to have little salt means that you’re a bit daft.

Non fare il salame.   |   Don’t be a salami.
This one is probably my favorite. A nice way of saying don’t be an idiot. I can’t count how many times I’ve heard my Italian aunt say this to my cousin when he’s goofing around. Non fare il salame has more of a masculine connotation; non fare l’oca, or “Don’t be a goose,” is a female equivalent – to be silly, easily distractible, and a little out of it (my other cousin gets this from my aunt, too).